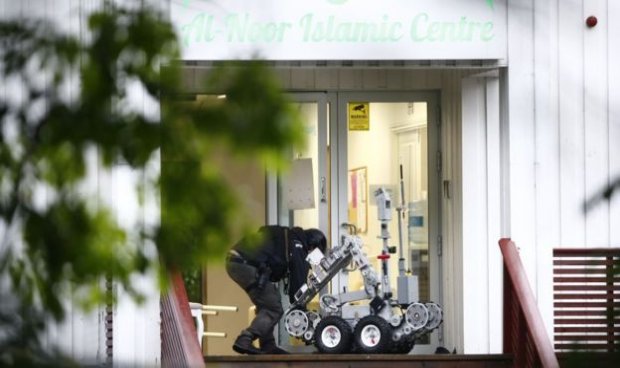 The gunman was overpowered afer entering the mosque
A shooting at a mosque in Norway is being investigated as a possible act of terrorism, police say.
A gunman opened fire on the Al-Noor Islamic Centre, on the outskirts of the capital Oslo, on Saturday.
One person in the mosque managed to overpower the gunman and was injured in the process. The suspect was arrested after the attack.
Police also charged the suspect with murder after his 17-year-old stepsister was found dead in a separate location.

What do we know about the suspect?
The suspect has not yet been named, but police have described him as a white Norwegian citizen of "around 20 years old".
He was said to be "from the area" where the mosque attack took place, in the town of Baerum.
Rune Skjold, the acting chief of the police operation, said the suspect had been known to police before the incident but could not be described as someone with a "criminal background".
Mr Skjold said the man appeared to hold "far-right" and "anti-immigrant" views and had expressed sympathy for Vidkun Quisling, the leader of Norway's collaborationist government during the Nazi occupation.
(Source: BBC)

The Italian partner of the Municipality of Tirana in the waste cleaning company... June 6, 2020
Op-Ed
MORE