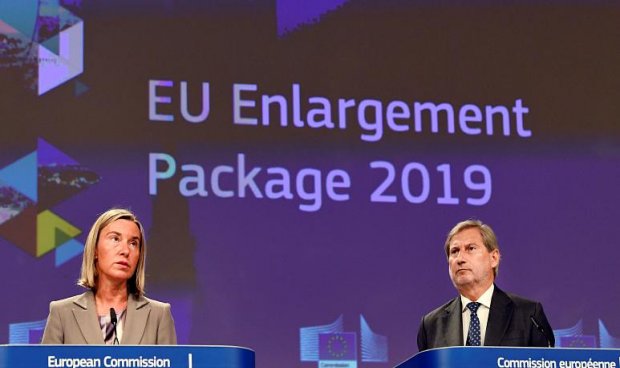 Dreams of entering the European Union may be fading for Albania after countries such as France and the Netherlands go cold on expanding the EU into the Western Balkans despite the European Commission's call for the accession process to begin.
Albania's prime minister Edi Rama expresseddisappointment at the situation, telling Euronews last week: "We have to face it that more and more the decision-making of the Council is not based on what we do, on what countries like us do but on the internal situation or internal political dynamics in different member states."
Both Albania and North Macedonia have had rule-of-law issues that have slowed their path toward membership.
In July, EU's commissioner for enlargement, Johannes Hahn, said that North Macedonia needed to reform its judiciary to ensure it could handle high-level crime and corruption cases before the EU could set a date to start accession talks.
Accession talks for the two countries are expected to be held in October.

Why are France and The Netherlands blocking accession talks with Albania and North Macedonia?
Political scientist Florian Bieber said that, in France's case, there is general scepticism among elites about enlargement.
"I think there's a sense among elites that the previous enlargement was a mistake and that it undermines French leverage in the EU," he said. "In that sense, there's general scepticism towards enlargement."
As for The Netherlands, he believes there's more of a worry about letting in more countries with rule of law problems since some member states like Hungary and Poland don't have a good record dealing with such issues.
Bieber added that stereotypes liking Albanians with organised crime didn't help their cause.
In the end, "a lot of it has to do with the domestic politics [of these countries] and not so much with the situation on the ground," Bieber said.

Does this reluctance make a mockery of EU enlargement policy?
Bieber said that frostiness towards letting new members in could "undermine the credibility of the EU."
"Observers in the region see France and The Netherlands' policy as not being fair and motivated by domestic politics and stereotypes," Bieber said. "This undermines the EU as being a fair player and having clear criteria, especially since the commission has given the green light for negotiation."
Bieber stressed that this kind of attitude will likely send a negative signal to North Macedonia and Albania's governments who might think it's not worth making difficult compromises if they won't be accepted in the bloc.
"Especially for North Macedonia who worked so hard to resolve the name dispute," said the political scientist.
This attitude is also sending a message to Serbia and Kosovo who have the biggest open issue in the region, said Bieber, adding: "Why should either country make a difficult deal when the EU isn't able to give anything in return?"

Could these opinions change?
France is the biggest question, noted Bieber. "It might be willing to accept North Macedonia but I think that means that Albania will not move forward, at least for the time being."
"Albania's domestic disputes and confrontations between the ruling party and the opposition undermines Albania's ability to make the case for their membership," said Bieber.
For Bieber, the best way these countries can convince France that they have changed is to try extra hard at tackling their rule of law and corruption issues in hope to persuade the French government of the changes or create leverage in the EU, "so that other member states put pressure on France."

How long can the waiting game go on for?
"Albanians are probably some of the most pro-Europeans in the Western Balkans," said Bieber. "There's no political party that has rejected EU enlargement so in that sense there isn't a plan B in Albania."
"But, certainly, the longer there is a wait and the longer there is a sense that this is unfair it will undermine the EU in the Western Balkans, in Serbia, and countries that are less committed to the EU accession process."
Bieber added that this lack of engagement could raise questions about the EU being able to do anything at all.
"There's a question of credibility of the EU more in general," he said.
But the political scientist was also worried about who would be the next commissioner for enlargement. "For the EU to be effective, it requires an enlargement commissioner who has the ability to put the policy on the agenda and be a credible actor for it."
Uncertainty about the next enlargement commissioner has raised fears about the enlargement policy be further downgraded in the EU agenda.
(Source: euronews.com)