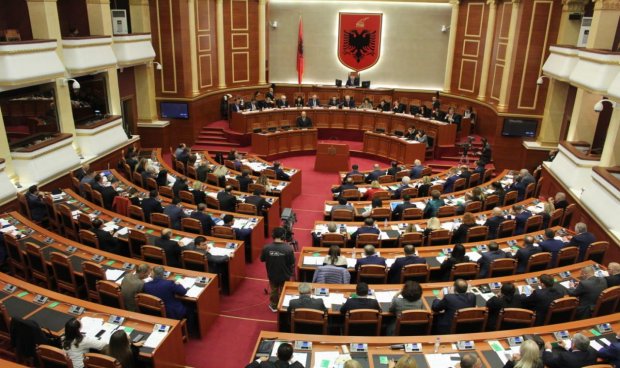 Parliament has elected Elsa Toska and Fiona Papajorgji to the Constitutional Court in total violation of the Constitution.
Constitutional Court judges are appointed by rotation, following the transitory dispositions in the Constitution, art 179(2):
The first member to be replaced in the Constitutional Court shall be appointed by the President of the Republic, the second shall be elected by the Assembly and the third shall be appointed by the High Court. This shall be the order for all future appointments after the entry into force of this law.
This rotation, however, was made nearly impossible by the Justice Nominations Council (KED), which forced both the President and Parliament to elect two judges each before November 8 and November 13 respectively. On November 7, President Ilir Meta made clear that the actions of the KED would automatically lead to an unconstitutional election procedure, which indeed has transpired.
After the deadline for the President expired, the highest ranked candidate for the second vacancy to be filled by the President, Arta Vorpsi, was automatically elected.
This election violated the rotational election demanded by the Constitution. Subsequently, both candidate lists provided to Parliament had become unconstitutional, because they contained less than three candidates.
Nevertheless, Speaker of Parliament Gramoz Ruçi today pushed through the "elections" - I put this between quote marks - because there were only three candidates available for two positions, with the election of Toska and Papajorgji as a result.
Ruçi, who is a former Minister of Interior of the communist dictatorship and last person that should be involved in any of this, stated:The deputies have been informed about the position of the President. In relation to this I have turned to the KED, which has responded with appropriate reasonings, and concludes that the first candidate [Arta Vorpsi] is automatically elected member. Since there were political and procedural evaluations I have turned to the council of legislation, which is the only mechanism that the Assembly have, to give its opinion about the constitutionality. The council has concluded that, considering the propositions of the KED etc., that the procedure that we will vote is completely constitutional.
Let it be clear that the only new member of the Constitutional Court elected fully according to the Constitution is Besnik Muçi. The other three candidatess have been elected in violation of art. 179(2), whereas Papajorgji and Toska have been further elected in violation of art. 125 of the Constitution, which states that members are elected from the "the three first ranked candidates." Neither vacancy had more than two candidates, which means there was basically no choice for the deputies.
The origin of this cascade of violations - which has severely undermined it legitimacy even before reaching a quorum - is the KED, which itself is incomplete and so-called "temporary." The result is a justice reform that is derailing ever further, producing a deformed judiciary without grounding in any law, but determined by the forces of political necessity and international pressure.
The three newly elected members of the Constitutional Court, however, are not yet in duty. They need to be sworn in before the President in order to start their job, following art. 129 of the Constitution.
These judges have been elected in violation of the highest law of Albania. The President ought to block their swearing in, and all three vacancies ought be reannounced from the beginning, so that new judges are elected according to the Constitution, and Parliament actually has a choice.
The justice reform is based on the rule of law, it can never be allowed to proceed in violation of it.
(Source: Exit.al)