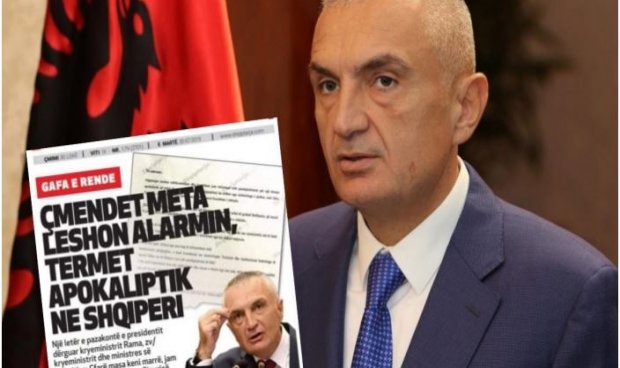 The November 26 earthquake was not a test of Ilir Meta's mental health as we have been told for months, but the proof that the state's renaissance has not only failed, but is at its darkest. A proof of this could be the warning that the Head of State made to the Prime Minister and other institutions to see the country's readiness to handle natural disasters.

But what happened upon raising that concern? Like any major problem, Rama saw it with the eye of a clown. Since it was time for the June 30th election decree, he said in an interview: "Meta has it easy, issues a decree and cancels the earthquake."
In a series of speeches he treated the president as a fool. Elisa Spiropali went as far as she always has.
Ridiculous in her copycat declarations, as only she knows, even she begged the President to postpone the earthquake by a decree.
Even the pro-government media choruses, which took advantage of the occasion to make fun of the man who was causing trouble to Rama.
So the whole public debate was shifted to the topic whether "is Ilir Meta crazy or not"; "Is it madness to Predict Earthquakes"; as if the greatest distress was whether the renaissance had endowed us with its votes, a normal president or a mentally ill one.

But reading it in retrospect, the president's letter focuses neither on the surname 'apocalyptic' nor on the genius to predict the earth's seismic vibrations. It asks the government one simple thing: "Have you taken measures to deal with natural disasters?" Or as it is explicitly stated in the letter: "What are our capacities for handling and the measures you take if our country is hit by an earthquake of such magnitude? What measures have been or will be taken to respond in a timely manner and to minimize the potential consequences at the local and local level? If you find it reasonable, I am ready to convene the National Security Council immediately on this matter alone, as any underestimation of the situation can have tragic consequences for the lives of citizens in the first place," said Meta in its letter.

As it turned out on November 26, the clown state that was performing in parliament for Meta's 'mental illness' had failed to take any action. Neither were the people taken out of the buildings that had been cracked by the first earthquake, and the state reserves were empty as we asked NATO even for sheets and pillows, and the dogs that discovered people in ruins were borrowed from Kosovo.
On the first day our rescuers dug with hands on the ruins and they had no equipment to use in those difficult days. Ironically, the power was cut in the Durres seismological center, and it could not record the magnitude of the disaster.

This is the state of rennaisance, which have only one merit, that even when they leave you dying, they try to make you laugh. Just as they did with Meta's mockery of the apocalyptic earthquake neglecting the real problem he raised.

So today after the disaster we have learned one thing: Neither if Ilir Meta has normal mental health, nor if he has any divine gift to predict what science can not do, but that we are led by a flock of charlatans, which the only thing they know how to do is to chuckle over the rubble.

Salvini's Declaration on Albanian Flag in His Rally

The leader of Lega Nord in Italia, Matteo Salvini, reacted after an Albanian Flag... January 19, 2020

President of the Republic of Albania, Ilir Meta bowed this Sunday in front of... January 19, 2020
Economy
MORE

Labor force is turning in a real problem in Albania. According to the Albanian... January 17, 2020
Social
MORE

Croatia Airlines intends on launching flights between Zagreb and Tirana this... January 19, 2020

Albania Has Highest Rate of Prisoners in Region

Albania is the Western Balkans country with the highest rate of inmates in relation... January 19, 2020
Current Events
MORE

Citizen that dealt in bills of exchange has been assaulted in Durres, as reported on... January 19, 2020

Group of 6 people committing fraud with loans was discovered and neutralized this... January 19, 2020

Boris Johnson has unveiled plans to mark January 31 with a light show, a countdown... January 19, 2020

Erdogan: Road to Peace in Libya Goes through Turkey

Houthi rebels have killed at least 70 Yemeni soldiers in a missile attack on a mosque... January 19, 2020