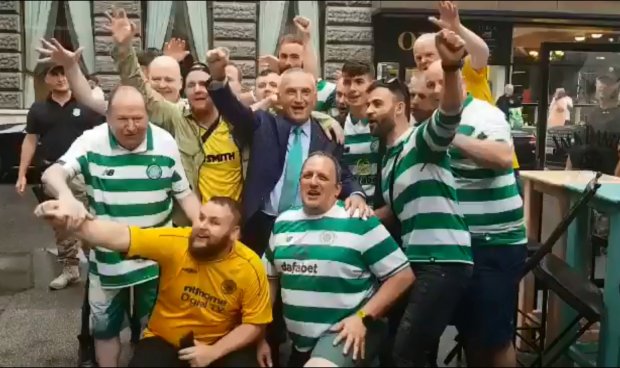 You have to wonder what world leaders think when they receive a message from Ilir Meta, the President of Albania.
The 50-year-old former weightlifter and red-hot Celtic supporter has been President of the Balkan republic for the last two years.
Meta was previously Albania's Prime Minister, aged just 30.
He has spent the past few weeks overseeing rescue operations after a horrific earthquake last month killed 51 and left 3,000 injured.
But despite that tragedy, Meta found time to speak to SunSport about his love for the Hoops.
He said: "My love for Celtic grew strong when Albania's captain Rudi Vata signed for them in the 1990s.
"But I had been aware of them long before that. When I was a kid, Celtic played against Partizan Tirana in the European Cup in 1979.
"I was a football fan and I can even remember the score and the scorer. It was 1-0 to Partizan, after a fantastic goal from Agim Murati.
"That was a memorable match because in the Communist days there were very few matches against teams like Celtic.
"Unfortunately Partizan lost the return 4-1 in Glasgow.
"Then in 1982 I was in the stadium when Aberdeen drew 0-0 with Dinamo Tirana. So I've known about Scottish football for a long time.
"When I was a student I worked as a commentator on Albania's sports radio show 'From Match To Match'.
"Before that I had been a weightlifter with Dinamo, who were Albanian champions.
"I competed in the national youth championships, but I had to stop when I went to university.
"When I became Prime Minister I would discuss football with Rudi when he played for the national team. He'd talk to me often about being part of a great club at Celtic.
"At that time I also met Lord George Robertson, who was secretary general of NATO, and he would always talk to me about Rudi and Celtic.
"When Rudi finished his career in Albania our families would meet up socially.
"I've been to Glasgow once because my daughter Bora studied there.
"We got into the taxi and the driver asked where we were from. When I told him, he cried: 'Albania! Rudi Vata's country'!
"That proved the importance of football to me, we were far from home but football was the bond.
"The next day I went into the Celtic shop in Glasgow and bought some Celtic t-shirts which I wore when I went hiking.
"I also have a Celtic jersey that Rudi gave me as a gift.
"One day I will come to Scotland for a Celtic game. I can hardly wait for that day.
"Rudi has invited me many times but my schedule in Albania is so busy! But I am determined that in 2020 I will come to Glasgow and when I come it won't be as President.
"I want to be a fan among the fans, nothing more.
"My favourite player at the moment is Fraser Forster, the mountain. Him and Scott Brown, the leader.
"But the true power is the team. And the fans with their anthem: 'You'll Never Walk Alone'."
Meta has become a cult figure among Hoops fans on social media for repeatedly congratulating Neil Lennon's side after wins.
That included their Europa League triumphs against Lazio and the Betfred Cup final success.
(Source: The Sun)