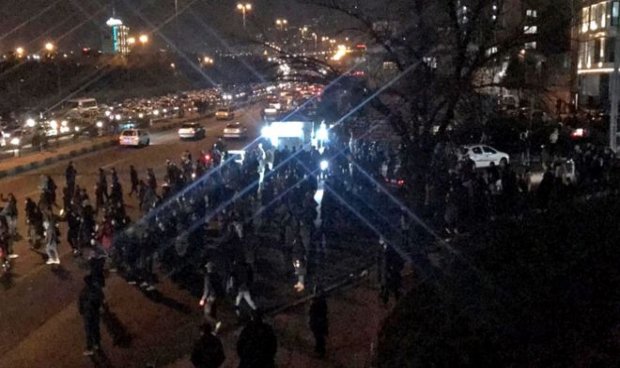 Protesters gathered near Tehran's Azadi Square on Sunday night
Police in the Iranian capital, Tehran, have denied using live ammunition against protesters outraged by the shooting down of a Ukrainian airliner.
Officers had been given orders to "show restraint", the chief of police said.
Videos posted online on Sunday recorded what appeared to be gunfire and showed an injured woman being carried away.
Protests erupted on Saturday, after Iran admitted firing missiles by mistake at the Ukraine International Airlines jet that crashed near Tehran.
All 176 people on board flight PS752, mostly Iranians and Canadians, were killed.
For the first three days after the crash, Iran denied that its armed forces had shot down the plane and suggested there had been a technical failure.
The admission of responsibility, which came after video emerged of a missile appearing to hit the plane, provoked widespread anger in Iran against the ruling establishment.
Days earlier, Iranians had been united in grief over the killing of Gen Qasem Soleimani, their country's second most powerful man, in a US drone strike in Iraq.
The latest reports of a possible crackdown echo the protests in Iran in November over rising fuel prices. Human rights groups say scores of people were killed.
(Source: BBC)