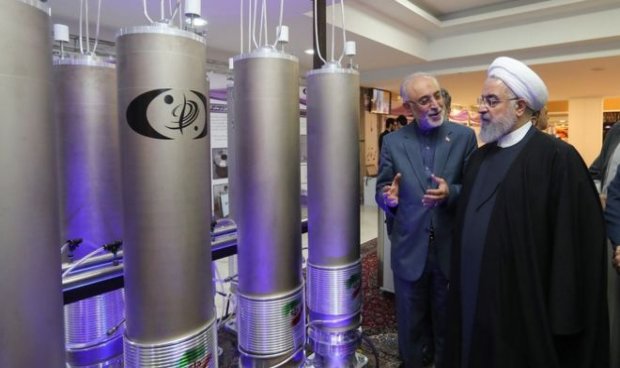 Iran says it suspended its nuclear commitments in response to the reinstated US sanctions
European powers have triggered a formal dispute mechanism over Iran's breaches of key parts of the 2015 nuclear deal - a move that could spell its end.
Iran has gradually lifted all limits on its production of enriched uranium, which can be used to make reactor fuel but also nuclear weapons.
It has said it is entitled to do so in response to sanctions reinstated by the US when it abandoned the deal in 2018.
France, Germany and the UK said they did not accept Iran's argument.
The mechanism, set out in article 36 of the deal, involves the dispute being referred to a Joint Commission that will have a minimum of 15 days to resolve the issue.
If the complainants are still not satisfied, they can refer the matter to the UN Security Council, which could vote to reimpose any sanctions lifted under the deal.
This would be the end of the deal. Iran's foreign ministry accused the Europeans of abusing the process and said they "must be prepared to accept the consequences".
But the ministry spokesman said Iran was "ready to... make constructive attempts to maintain international agreements and would welcome any practical initiatives in this regard".
Russia also criticised the Europeans' move, saying the activation of the mechanism could make a return to implementation of the deal impossible.
A Foreign Ministry statement quoted by Russian media described the decision as "deeply disappointing and extremely concerning".
(Source: BBC)

Tirana Court has decided this Friday to mitigate security measure for persons... January 17, 2020