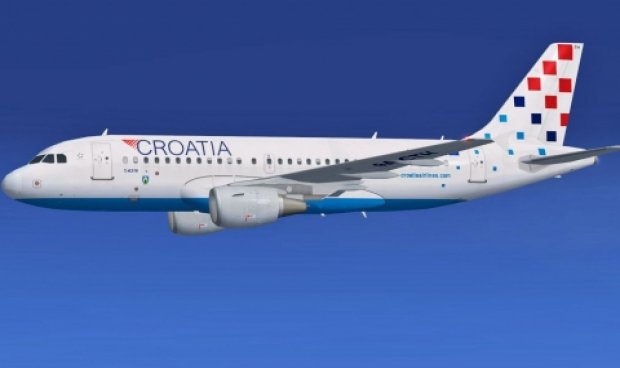 Croatia Airlines intends on launching flights between Zagreb and Tirana this summer season, complementing its plans to commence operations to Podgorica and Sofia.
The carrier's CEO, Jasmin Bajic, and the Director of its Commercial Division, Slaven Zabo, met with Albania's Ambassador to Croatia, Riza Poda, to discuss the future service. "Both parties agreed for talks between Croatia Airlines and relevant authorities in Albania to commence immediately in order for this important project to be realised as soon as possible", the Albanian Embassy in Zagreb said in a statement. Earlier this week, Croatia Airlines confirmed it plans to expand its network and fleet in 2020, as well as increase capacity on some existing routes.
Croatia Airlines used to maintain flights between Zagreb and Tirana decades ago, however, there have been no services between the two capital cities in years. In 2016, Croatia Airlines outlined plans to establish a base in Tirana, along with several other cities in the region, but the strategy never materialised. In 2017 the Albanian Prime Minister, Edi Rama, said the country's newly established national airline, Air Albania, would launch operations to Croatia, although it is yet to do so three years on. Over the past few years, an average of 24.000 Albanian passport holders have visited Croatia on an annual basis. The Croatian Prime Minister, Andrej Plenkovi?, will visit Tirana in May and will be accompanied by a large delegation of Croatian investors.
Croatia Airlines is looking to establish a greater presence in the region following the collapse of Adria Airways, which had a developed regional network, including nonstop flights from Tirana to Germany. Its bankruptcy has opened up opportunities in several markets previously served by the Slovenian carrier. In September of last year, Croatia Airlines said it would be "good to expand" as a result of Adria's demise but noted it was too early to react at that point in time. Croatia Airlines, as well as its hub in Zagreb, have benefited from a greater number of Slovenian travellers using its services since Adria's collapse. On January 13, Nomogo, Slovenia's largest travel and mobility provider, commenced a double daily shuttle between Ljubljana and Zagreb Airport.

The Italian partner of the Municipality of Tirana in the waste cleaning company... June 6, 2020
Op-Ed
MORE