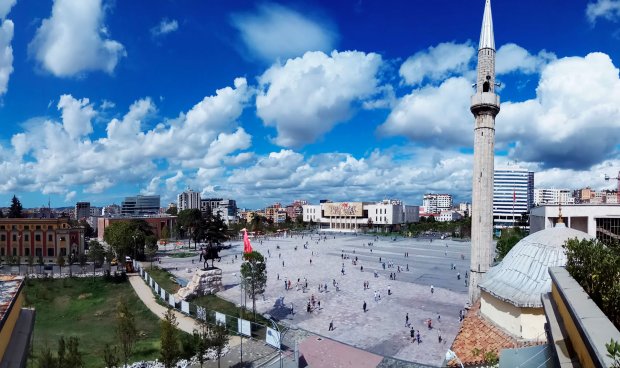 Last week, a 4.9 magnitude earthquake shook the Albanian capital Tirana. There was no damage, but people streamed out of their homes because the country is still traumatised by a 6.4 magnitude earthquake in late November that killed 51 people and left 15,000 homeless.
"The second half of the year was dominated by earthquakes," the
city's mayor Erion Veliaj tells me in his office. "Environmental, political, diplomatic."
The biggest earthquake of the diplomatic kind was French president Emmanuel Macron's veto in October on the opening of EU accession talks with Albania (and North Macedonia).
As the UK extricates itself from the EU, Albania and the other countries in the western Balkans desperately want to join. However, they now wonder if they will ever be welcome in the bloc.
In the hopes of beginning accession negotiations, Albania has been going through a highly complex judicial vetting process, which saw the ranks of its supreme and constitutional courts thin out, leaving them incapable of holding trials. The country is also pushing through a comprehensive law on organised crime that will ease international co-operation in criminal cases.
North Macedonia took the highly contentious step of changing its name to unstick a veto from Greece, only to be stymied by Mr Macron. As the French president seeks to reform the EU before expanding it, those who want to join find themselves further away than ever.
"This is a breaking point," a friend tells me over a pot of caj mali, (mountain tea), in a downtown café. She says she and her compatriots feel the decision not to open the path to negotiations was due to persistent anti-Albanian feeling and Islamophobia (though the country is mixed between Catholics, Orthodox Christians and Muslims).
Most people in the Balkans would prefer to see their countries join the EU for the economic opportunities and standards of living it provides. But for a sizeable group, the bloc, as it wrestles with Brexit, swelling populism, demographic anxiety and sluggish growth, no longer represents a dream. And with its refusal to reward a move so groundbreaking as changing a country's name, it fails to represent the values that so many have yearned to establish in the region since the tumultuous 1990s.
There's a joke in the Balkans that says if the countries aren't allowed to enter the EU, citizens will join anyway -- one by one. It is happening. The countries in the region have collectively lost more than 400,000 citizens of working age in the past five years, according to recent research by the Regional Cooperation Council.
While there is a palpable sense that another era is dawning in the Balkans, no one knows what it will look like. "Now that it is 2020, it is our fourth decade of transition," Albania's former foreign minister Ditmir Bushati tells me over a lunch of grilled eel and sea bass. "That's the same amount of time that we had communism here. And four decades in, there is a risk that the EU could lose the region."
Meanwhile, he notes, China is quietly and steadily expanding its influence.
Albania, like the rest of the Balkans, has long been a site of geopolitical competition. A century ago, Tirana became the Albanian capital because all of the other major cities were occupied -- in the north by Serbs and Montenegrins, in the south by the Greeks, and in the west by the Italians. Today, Albania's desire for a future inside the EU is clear, but many of its people feel unwanted.
The EU, says Luigi Soreca, its ambassador to Albania, mobilised resources after November's earthquake, treating the country "just like a member state". Emergency funds totalling EUR 15m were raised. He says this helped to restore the bloc's reputation, which had suffered after Mr Macron's veto. More will be pledged at a donor conference in Brussels later this month. But aid is the continuation of a donor-client relationship, not necessarily the basis for a more equal one.
Even so, it has been crucial. Now only a few hundred families remain without permanent accommodation, Mr Veliaj says. Recovery from October's diplomatic tremors will take rather longer.

Several members of the Socialist Party addressed a motion to the SP Congress one day... February 27, 2020

Minister of Justice, Etilda Gjonaj accused on Thursday the President of the... February 27, 2020
Economy
MORE

Although Albania has not yet confirmed a case of coronavirus, local businesses... February 27, 2020

US officials briefed senators yesterday on coronavirus and said a vaccine was at... February 26, 2020

Earthquake of 3.1 magnitude was recorded this Thursday near Tirana and Durres, in... February 27, 2020

Court against Organized Crime has made this Thursday the decision to sequestrate... February 27, 2020

Ministry of Health and Social Protection calls on citizens who have traveled from... February 27, 2020
Op-Ed
MORE

Israeli Scientists: 'In a Few Weeks, We Will Have Coronavirus Vaccine'

Israeli scientists are on the cusp of developing the first vaccine against the... February 27, 2020

The novel coronavirus has gone global. What had began as an outbreak in China is now... February 27, 2020

WHO on Coronavirus in Europe: 'Be Prepared'

The director of the World Health Organization (WHO) in Europe, Hans Kluge, said on... February 27, 2020