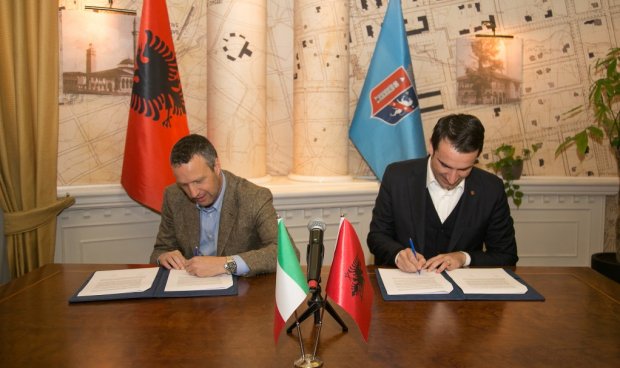 The Italian partner of the Municipality of Tirana in the waste cleaning company 'Eco Tirana', is being investigated by the Italian prosecution for money laundering in favor of the mafia group Ndragheta. The news was made public by the Italian media.
Andrea Miglioranzi, until January 30, 2018 member of the Board of Directors of AGSM Holding and President of AMIA (one of the two partner companies of AGSM), partner company with 'Eco Tirana' and former mayor of Verona Flavio Tosi, who signed the agreement for the establishment of the joint company 'Eco Tirana', are being investigated for cooperation with members of the mafia group Ndragheta.
On June 4, 2020, the Italian Prosecutor's Office found that "the company of the Municipality of Verona, Amia, has been used for money laundering linked to the criminal organization.
As local media reported prosecution has charged 26 people, including former mayor Tosi and Andrea Miglioranzi, with collaborating in a criminal organization, fraud, money laundering, bribery, drug trafficking, corruption, transfer of material goods in violation of the law, etc.
Tosi is being investigated for using the municipal company, Amia, to liquidate a bill worth more than EUR 5,000 on behalf of a private investigator.
Meanwhile, Andrea Miglioranzi, actually under house arrest, is accused of using the company of the Municipality of Verona, Amia to clean up the waste, for the circulation of money of the organization Ndragheta.
The investigations, directed by the District Prosecutor of the Court of Venice and conducted between 2017 and 2018 by a working group made up of investigators from the first division of the Central Operational Service of the State Police and agents of the Verona and Venice Mobile Teams, unveiled "serious clues relating to a structured and autonomous local 'ndrangheta operating in Verona and its province, attributable to the powerful Arena-Nicoscia gang in Isola Capo Rizzuto, in the province of Crotone.
"I don't know anything about it, I will come out totally alien, as on all other occasions," says Tosi. "As Mayor I have always been very strict in my mandate, so much so that I have not used drivers and vehicles paid by the Municipality for many years even though I have the right to do so, saving the public coffers tens of thousands of euros, paying out of my pocket even when I would not be been held, so the present investigation into me (which turns out to be completely different and which I also learn from the media this time) frankly makes me smile ".
And he continues: "In 2006, I was even subjected to a house search by the Regional Councilor, only to be completely acquitted: the magistrate on duty sued me for my rather strong reply, which cost me thousands of euros for proclaiming and defending my innocence. The same script has been repeated other times over time, most recently in 2014, and the undersigned has come out totally foreign, just to change. Therefore I moderated the tones of this answer, to avoid being sued by some colleague of Palamara, for the respect I feel towards the judiciary and the many truly independent togates, but certainly not all of them. I don't add anything else: the complaints from magistrates resentful of my declarations have cost me enough ".
On 2016 the waste cleaning company that operates in Verona was taken as example by Tirana Municipality.
"We are here to celebrate the conclusion of a long journey, which will undoubtedly be a success story," said Albanian Prime Minister Edi Rama.